It is our great privilege to have distinguished people in the fields of business and education to act as our Advisory Board. 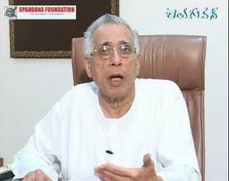 1. Dr. Anne Bhavani Koteswara Prasad, popularly known as ABK - is referred to with reverence as the doyen of vernacular journalism of Andhra Pradesh. With a colourful journalistic career spread over 50 years Dr. ABK has the singular honour of being the Editor of all the mainstream journals of Andhra Pradesh. At present, he is heading the A.P.Official Language Commission as its Chairman.

A profile writer, Dr. ABK penned thousands of editorials that were compiled into ten volumes. Apart from his editorial collections Dr. ABK compiled a dictionary for the exclusive use of Telugu Journalists. His book "Paradheena Bharatham" - a critical study of Economic Policies implemented by various Governments - won him accolades and encomiums. He toured Russia along with Shri Rajiv Gandhi to cover events, West Germany as a guest of the Republic, and also visited the U.S.A, Malaysia and Singapore.

Dr. ABK is respected as a scholar journalist throughout the country. Many regional, national and international institutions have the privilege of showering prestigious awards upon Dr. ABK:

Editor of the Decade with Gold Medal (Hyderabad - 1986)